A Daunting Who's Who

Add it all up, and that means 11 of 16 games versus quarterback with at least an 80 QB rating from last year, and again, a 12th if you just include Vick that Saturday night (Dec. 16) in Atlanta.

Oh, by the way, it's not just quarterbacks, either. Do you realize the Cowboys will face the top three receivers from last year, too, figuring they have to take on Arizona's Larry Fitzgerald and Anquan Boldin along with Carolina's Steve Smith? Fitzgerald and Smith led the league with 103 receptions and Boldin was one short of making it a three-way tie.

You serious? Having to face seven of last year's Top 10 receivers by yards? And two, no less, (Fitzgerald and Boldin) in one game?

And get this? When it comes to last year's Top 10 leading NFC receivers, the Cowboys will face all but two, St. Louis' Torry Holt and Green Bay's Donald Driver. And thanks to themselves, included in those eight receivers they must contain is none other than Keyshawn Johnson. That's right, Johnson's 71 receptions ranked tied for ninth in the NFC with Washington H-back Chris Cooley.

Can you say cornerback?

Wonder if T.O. can cover, too?

Cowboys owner Jerry Jones casually mentioned last week the possibility of selecting a cornerback come April 29 if a "top one" just happened to fall to their 18th slot. Hey, maybe the Cowboys have given this more thought than we think.

After all, there is Terence Newman and Anthony Henry for starters, but Henry remained healthy for only half of his first season in Dallas last year. Then there is Aaron Glenn, but he turns 34 the week before camp begins. After that, Jacques Reeves, but how many teams in the NFL depend on a seventh-round draft choice to hold down the fort at cornerback?

So this daunting schedule, or at least the opposing quarterback-wide receiver personnel, just might give the Cowboys pause. Something else to think about.

Us, too, now that we have the schedule in black and white. 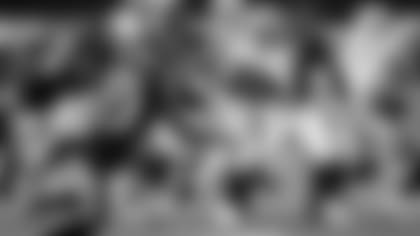 Keys to Victory: Cowboys Need To Keep It Clean

The Cowboys have more talent and more weapons. The only thing that can prevent them from winning this game is mistakes and penalties. But a clean game can mean an ugly outcome for the Texans.

The Texans have a good young running back, but most of their top-line players are on the defensive side of the ball.

Updates: Washington On Track to Debut vs. HOU

Don't miss any of the action with our daily updates: news, notes and more throughout the Cowboys' regular season and offseason.